Consumption is closely connected to how people organize their everyday lives, including their routines, expectations and attitudes. Consumption can be viewed from the perspective of both wellbeing and gender. There is often a correlation between these two explanatory models. 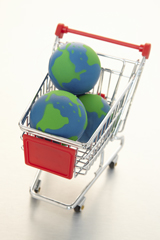 Out of the world’s population, only seven percent live in the EU, but those seven percent are responsible for 17 percent of the world’s total consumption (1). The Nordic countries are among those that consume the most (2), making consumption a relevant theme when discussing climate change from a Nordic perspective. There are also differences between what and how women and men consume.

Consumption patterns generally differ between women and men, in both poor and rich countries (3). Two important factors contribute to these differences:

Frequently, women have access to less income and free time than men, which has an impact on how and what they consume. Women play an active role in daily consumption, as they are often responsible for family shopping. From this perspective, women represent the largest global consumer group. This does not, however, necessarily mean that they themselves are using everything that they purchase (4).

Both women and men consume. But the patterns of their consumption are different (5). Statistics gathered for OECD countries indicate the following gender differences in consumption (6):

It should be acknowledged, however, that what is often referred to as women’s consumption is really more representative of family consumption. All in all, men’s consumption is more energy intensive and harmful to the environment than women’s. Thus, women’s ecological footprint is smaller than men’s in both rich and poor countries (7).

At the same time, research shows that higher emissions go hand in hand with higher incomes among both men and women. Traditionally, consumption has been seen as a typically female activity, while men have been out in the workforce earning the family livelihood. But in the rich and relatively gender-equal Nordic countries this view is no longer accurate (8). As women’s income levels have begun to approach those of men, their consumption patterns too have begun to look more alike.

The complexity of the relationship between consumption and gender is illustrated in a Danish study on family consumption habits, which found no significant differences between the consumption of women and men, even as the study’s participants, when interviewed, sometimes reported experiencing great differences (9).

Consumption is not just for adults. A Norwegian study indicates that children are becoming consumers at an increasingly early age, and that they are reproducing consumption patterns. Measured in money, boys consume more than girls, and even among children there are gendered differences in what is consumed. Girls’ consumption is more targeted to clothing and makeup, whereas boys spend more in all other areas, including computers, technology and sports (10). A Danish study focusing on 10–12-year-olds found similar results. According to the Danish study, boys’ attitudes toward advertising and consumption were more negative than those of girls (11).

Since the Brundtland Report  from 1987 and the 1992 Rio Earth Summit, sustainable consumption has received greater attention in international politics (12). At the Oslo Symposium on Sustainable Consumption, sustainable production and consumption were defined as:

“the use of goods and services that respond to basic needs and bring a better quality of life, while minimising the use of natural resources, toxic materials and emissions of waste and pollutants over the life cycle, so as not to jeopardise the needs of future generations”. (13)

Since then, there has been more focus on production and consumption, but no systematic information on the connection between gender, sustainable consumption and climate (14). Studies indicate that gender is a significant factor in sustainable consumption in that women are more inclined to purchase ecological foods, recycle more than men, and care more about efficient energy use, compared to men (15). Women are also more likely to weigh ethical considerations, such as child labour and “certified fair” markings when making consumer choices. This is true also in the Nordic countries, which rank higher than most Western European nations in the making of ethical consumer choices (16). Statistics from Sweden indicate that even women in the poorest sections of society, single mothers, are buying fair trade products (17).

When it comes to consumption and gender, it is important to keep in mind that neither women nor men constitute a homogenous group. Consumption is the product of interplay between gender and other factors, like attitudes and lifestyle. This must be taken into account if we are to avoid prescribing certain patterns to women and others to men, and thereby strengthening existing gender stereotypes (20).

Critics claim that sustainable consumption does not suffice when trying to address climate change. An alternative that has received growing attention is so-called degrowth – a reaction against the growth-based economic system (18). Another alternative brought forth is individual emissions rights. The idea is that by assigning people individual carbon dioxide emission quotas, we could limit total emissions, since those who want to exceed their emissions quota could buy more from those who are not using their entire quota (19).

Johnsson-Latham, G. 2007.A study on gender equality as a prerequisite for sustainable development.Report to the Environment AdvisoryCouncil,Sweden2007:2.

OECD. 2008a. Gender and Sustainable Development. Maximising the economic, social and environmental role of women.www.oecd.org/dataoecd/58/1/40881538.pdf

Tufte, B.  2010. Children and youth consumers. In: Ekström, K.Consumer Behaviour : A Nordic perspecitve.Studentlitteratur.Lund.